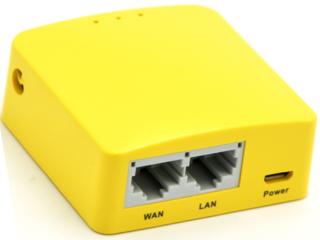 The GL.iNet software cannot configure on ArcaOS or on other OS/2-based platforms because our Firefox 45 web browser is too old. The MangoCom software overcomes this limitation by using the OS/2 port of curl to do the communications with the router.

MangoCom is a Rexx program that does basic operations to the Mango router to bring the internet to OS/2 machines that lack a direct, wired Ethernet connection.

MangoCom is a rexx program. Users enter the MangoCom command from an OS/2 Window. It takes the following commands at the command line or in a program object.

With firm as the only argument, MangoCom will wait for TCP/IP, wait for router, then print the firmware version of the router.

With scan as the only argument, MangoCom will wait for TCP/IP, wait for router, then scan for a list of local access points.

With enable as the only argument, MangoCom will wait for TCP/IP, wait for router, then enable the repeater mode.

Settings are stored in a plain text file, mangocom.rc

Plug the router into the laptop and boot the laptop. When the desktop appears, the system is ready to run MangoCom. MangoCom runs at the OS/2 command line. Open an OS/2 Window to use MangoCom.

If the access point is already known to the router, then run mangocom with no parameter. The command will complete when the internet connection is ready or the timeout is reached.

I found myself writing a program to control the Mango router. How did I come to want to do this?

I sell and use laptops with the ArcaOS operating system. These laptops use and need WiFi, but there are not OS/2 compatible drivers so the hardware is unavailable. I decided to use aTravel Router connected to the laptop ethernet port to provide WiFi support.

As I tried one Travel Router after another, I found that they are barely adequate for the task, and that some access points remain unavailable. But the Mango travel router, running open source GL.iNet software, was the best at what I needed.

I wrote about using Travel Routers on OS/2 on my website.

But then GL.iNet released version 3 of their software, and the web configuration screens required a newer web browser than the Firefox 45 available to OS/2 users. Once the new Otter Browser is released, that will be able to use the web interface on the router. But until that time, there was no convenient way to configure the router from OS/2.

I asked around and found that there is an API available to control the router using the curl program. There is a recent port of curl for OS/2, so I saw a possible answer to my problem. I wrote the MangoCom rexx program to test curl controlling the Mango router. I figured out how to send commands and get back a file that contained the response from the router.

But another problem appeared. The GL.iNet API returns its information as a JSON object. I needed to find an OS/2 parser for the JSON object. I found a nice REXX JSON parser on OS/2 World. And that is what is used in the MangoCom 0.90 beta.

I have now reached the limits of the REXX parser for JSON objects. A future version of MangoCom will have to overcome these limits. Another factor is that if the OS/2 web browser is released, the MangoCom router can be easily controlled from there. A further factor is that the OS/2 WiFi driver may eventually be released, making the Travel Router superfluous.